In the English countryside village of Pewsey, Scott Bergman was recommended to restore Victorian-era larch floors and replace elm floor boards in a historic home. "As soon as I saw the floor, I knew it had to be rescued in a way that preserved its age and character," says Bergman, owner at Planet Flooring in Slough in the United Kingdom. The village was built in the 1700s, and the house, listed as a Grade II building by Historic England, is the second-oldest property in the village. Bergman saved the elm, lifting and relaying the floor and making repairs with elm boards found in the basement. He chose not to sand the "warped and twisted" boards, as "it would be a shame to remove the age and patina." Instead, every plank was scraped and cleaned with solvents to remove the top layer of dirt and polish. "This revealed the true hidden character—all the scrapes, dents and marks from centuries ago became visible once again," he says. The floor was then coated with a dark oak stain to even the color, three coats of tinted shellac "to add richness" and two coats of a urethane oil, hopefully protecting the floor for centuries to come. 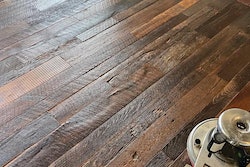 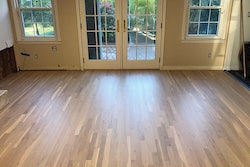 Sponsored: The Natural Floor Trend: Creating a Beautiful Floor With Efficiency and Ease 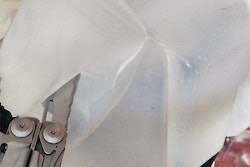 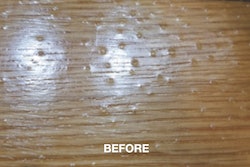