“It’s so Downton Abbey,” says Danny Stenhouse, owner of York, U.K.-based Sandhouse Floor Sanding & York Parquet Ltd., of this job site, Brockfield Hall. Designated as a Grade II* Regency building, a “particularly important building of more than special interest,” by the U.K.’s Secretary of State for Culture, Media and Sport, the Georgian home dates to 1804. The original fir flooring was in a state of disrepair by the time Stenhouse arrived on the job, recommended by other local tradespeople already working on the restoration. “As a good amount of boards were badly damaged, lots had to come out and be replaced with boards we salvaged from other rooms in the house,” he explains. Stenhouse ripped them down to the correct width and installed them using “old-school clasp nails.” The floor was then sanded, revealing the beauty of the original fir, and coated with a waterborne finish with a raw wood look. “It was hard graft, and I was happy to be doing it—I must be mad!” Stenhouse jokes, adding that a highlight was walking around the lovely grounds when he needed a break during the extensive project, which involved six rooms. “I’ve been working alongside some amazing craftsmen, some who work by Royal appointment. One day they would be there, the next, Windsor castle ... crazy but amazing!” 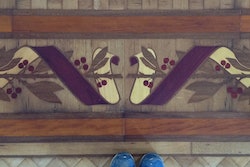