Rick Coning arrived at this job after other wood flooring companies saw the floor and simply said “no.” “I knew it was bad, and I knew it was going to be a hustle to get it to where it needed to be, but we’ve turned around a lot of floors in similar conditions, so I was confident it was going to turn out the way it did,” says Coning, owner at Trenton, Ohio-based Advanced Hardwood Sand and Finish. Knowing the work involved, Coning priced the job “accordingly,” close to what it would have cost to replace the flooring—something the homeowner didn’t want to do. Because the home had been her grandfather’s, she was trying to preserve the 1950’s home as much as possible in its original state. Coning assumed the flooring was pine, which is typical for homes of that vintage in the area, but once he scraped a spot, he could see it was actually red oak. He began the sanding process with a Diamabrush but still ended up sanding with two passes of 24-grit to get all of the mastic off before working his way up to using the Trio. When the homeowner saw the refinished floors, “She balled her eyes out,” says Coning, who focuses the majority of his business on refinishing and the satisfaction of making abused flooring look new again. “That’s one of the best parts about why we love what we do,” he says.—K.M.W. 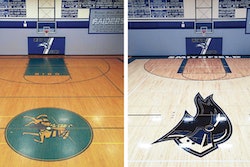 Wood Floor Rescue: From Amber to Amazing For This School Practice Court 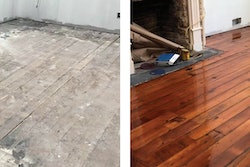 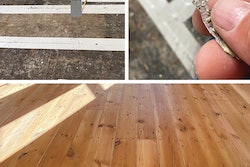