I was called by a well-known contractor to look at a large wood flooring installation in one of the nation's largest malls. The contractor had installed various styles of flooring materials throughout multiple stores within the mall. There were several areas with problems, but for this article, one specific 3/8 -inch, three-ply engineered product will be discussed.

The original flooring in the store was 3/8 -inch, engineered wood flooring that had been installed a few years ago. It developed cupping, edge swell and slight buckling. It was pulled up, and the new wood floor was installed in its place. Last summer—about nine months after the installation was completed—this new flooring began to exhibit the same problems as the original floor.

This wood flooring, just as the first, was directly installed over a pan-poured concrete substrate located on the second floor of the mall. It was surrounded by carpeting and ceramic tile at multiple locations throughout the store. The areas in question totaled more than 8,000 square feet, and the problems were visible in a majority of the areas. The carpeting also showed signs of a buckled or "released" posture in several sections.

Upon arrival at the location, I saw multiple stores throughout the first and second floor with varied problems involving multiple types of flooring materials. After overall observation, I suggested a moisture test (Relative Humidity Type, ASTM 2170-02) of the concrete slab in order to monitor its fluctuations over time. Holes were drilled in strategic locations throughout the entire store, after which plastic sleeves were set in place within these 12-mm holes. After acclimation, a measuring device was placed into these sleeves, and the concrete's internal humidity, temperature and dew point were recorded. These probes were in place for two weeks, along with other devices, to monitor the HVAC system. Hygrometers were placed in specific areas of the store and the corridor just outside of the store. I also removed some sample areas of the wood flooring and carpet tiles for testing and control references.

With all the data collected and some further tactile testing done, it was concluded the problem was related to condensation. The problematic conditions were influenced by the forced-air system throughout the mall, specifically, the airvent placement and the system's output capacity, both inside and outside the store. The store itself did not have individual control of its temperature and air-conditioning units. These units were either lowered at certain times or completely shut down overnight. As a result, the higher humidity in the environment collected, the concrete reached its dew point temperature, and moisture began to condense on its surface, just below the flooring material. When the moisture was drawn up into the environment due to the HVAC units, this moisture began to cup the wood flooring and cause the other problems, such as reactivation of the adhesives under the carpet tiles and wood flooring.

In order to correct this condition, we installed an electrically controlled radiant heating system. This system has a low height profile and was covered with a Portland-cement-based leveling compound. Identical wood flooring was installed in two test areas using a urethane adhesive and was then observed for one month. When there were no problems after that time, the system was installed in the rest of the store. There have been no problems with this flooring since, and two other stores in the mall have been corrected using this same application. We also had the HVAC systems' air vents re-directed to varied angles away from its direct flow under the concrete pan. The system is on only when needed and is not a primary source of heat to the store. Its function is to keep the slab's temperature above its dew point so there is no condensation on its surface.

It's important to understand dew point and relative humidity and their relation to flooring materials and their substrates. Relative humidity is the percentage of moisture in the air in comparison with the total moisture content possible at a given temperature. Dew point is the temperature at which the relative humidity reaches 100 percent, or saturation. Air must be cooled at a certain pressure and water content for it to reach saturation. When condensation occurs on concrete, the moisture migrates to a cooler environment. If the concrete surface and/or interior area are cooler than the room temperature, moisture will migrate towards that area. As this flooring problem illustrates, we need to observe the installation's surroundings, not just the material itself. 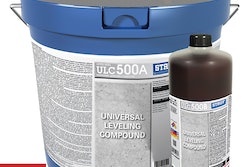 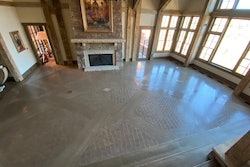 After Emmys, Crispin-Designed Floor Retires To A Private Ranch 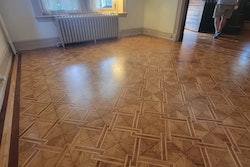 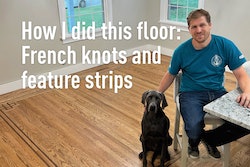