Dylan Chaplin of Chaplin Flooring in Shellharbour, Australia, prides himself on meticulous attention to detail when it comes to wood flooring jobs. And if ever that skill was needed, it was for this custom “waterfall” staircase.

Chaplin was approached via Instagram by the client, who asked Chaplin to come up with a unique staircase for the entry of this split-level home. Chaplin drew inspiration from several other staircase project designs he’d seen online and decided this was the perfect opportunity to incorporate it.

Chaplin used prefinished engineered European oak for the project. “Prefinished tends to be more difficult, as your miters are your finished product, so everything has to be to the millimeter,” Chaplin says. He began installation on the upper flight of stairs, working from the bottom up, creating one miter at a time, and “waterfalling” the same end grain piece down the face on the side. “From here, I continued that end grain and assured all my widths lined up exactly from the upper flight right down through to the bottom flight,” Chaplin says. The stairs were installed with adhesive and minimal “secret nails,” as they say Down Under. Chaplin used an orbital sander to slightly round the edges, then re-applied color and finish to the sanded areas. The entire installation, which included 16 steps and the wall, took about three days to complete and assure that “everything is dead in line and all perfect.”

“So much attention to detail, so much care and effort went into this from the start of the design to the last bit of oil,” says Chaplin, who founded his business two years ago.

He hopes to continue incorporating that “meticulous attention to detail” in future projects as he builds his young business.

“I have a lot of passion for creative projects and that is expressed through time and effort that goes into every little detail from the day of inspection,” Chaplin says. 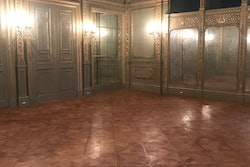 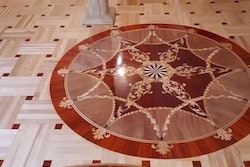 Wood Floor of the Week: No Corners Cut For Multi-Species Medallion and Border 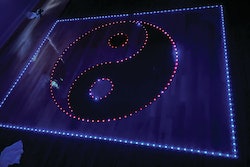 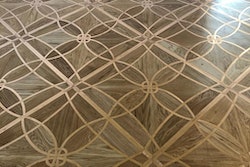