With the completion of this project, Austin MacDonough has officially run out of floors in his house to experiment with. "Time to move," he jokes. MacDonough, who owns Lapeer, Mich.-based MacDonough Woodworks, originally planned to use bricks in this project but shifted to end grain when he discovered stunning antique pine barn wood on Facebook Marketplace. "The wood was probably over 100 years old," he says. MacDonough milled about 3,000 ¾-inch end grain pieces with a miter saw and chose 11-inch-wide red oak planks to border the 200-square-foot room. He dovetailed the red oak boards, then glued and screwed them over the OSB subfloor. The end grain blocks were glued down in chevron patterns between the red oak. He hand-scraped the red oak boards and used an edger to sand the pine end grain, then applied English Chestnut stain to the end grain and a combination of stain and dye on the red oak. After a coat of hardwax oil, he filled the ⅛-inch gaps between the end grain with a mixture of black stain, poly and "lots and lots of sawdust." "I think I made probably 15 gallons of what I call 'redneck grout,'" he says. When the filler dried, MacDonough applied another coat of hardwax oil. The project took about a month to complete, and although it took up valuable real estate in the craftsman's home, the opportunity to refine his technique was priceless. 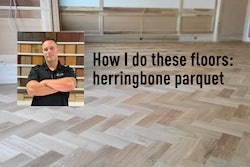