Earlier this year I was asked to evaluate the maple floors in the Great Hall of Faneuil Hall, which is a historic landmark building in Boston where Revolutionary-era meetings and protests frequently took place. Today the Great Hall is a major event venue, and the Faneuil Hall Marketplace + Quincy Market complex has 18 million visitors per year.

The last time the floor was sanded and finished in 2003, the City of Boston, which owns the building, was told the floors could not be sanded again. My examination confirmed this finding, and the condition of the existing finish from 2003 was very rough. Where gaffer’s tape had been placed on the floor, it had pulled off the finish, leaving bare wood, and bare wood was also exposed where the wood chair legs had worn through: 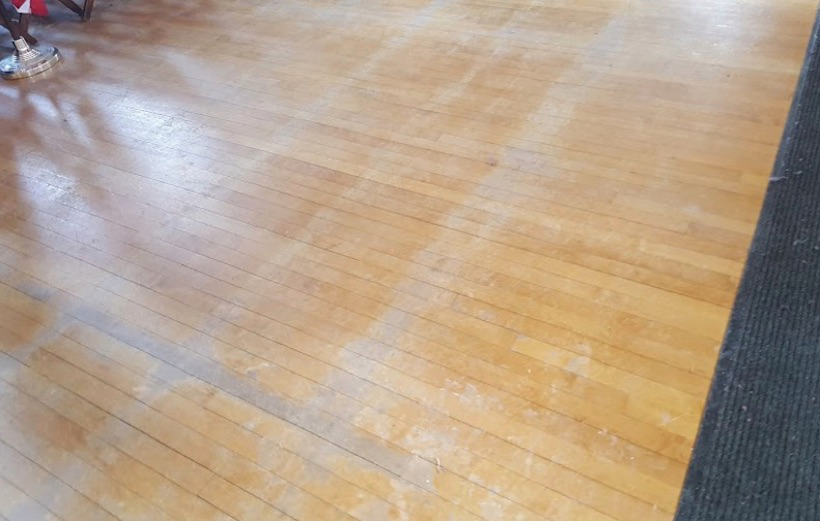 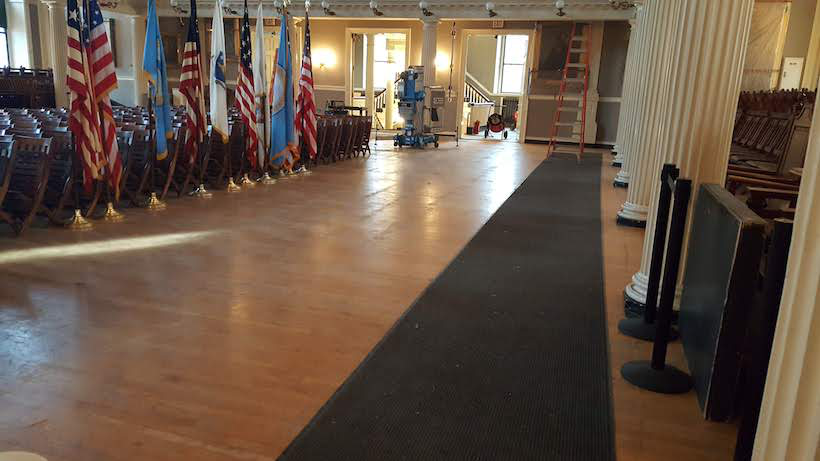 This meant that the traditional methods of sanding to bare wood or recoating the existing floor finish were not viable alternatives. I called Michael Purser of Rosebud Company, and he talked me through testing the finish with his non-toxic stripper. I was looking forward to spending time with Michael and his very experienced crew as they completed the preservation of the floor in this historical landmark.

Faneuil Hall had been closed for many months to replace the passenger elevator, upgrade the HVAC, and improve code compliance. The wood flooring job went out to bid in mid-April, and the City of Boston needed the job completed by the end of May. There are very few experienced individuals who can take on a stripping project of this scale. Traditional finish stripping chemicals are very nasty to work with due to the personal and job-site safety issues, but Michael’s Passive Refinishing system does not use methylene chloride or other similar dangerous and toxic chemicals. It removes wood floor finishes without affecting the structure of the wood flooring, and the stripping is truly dustless.

Michael was not able to schedule the job on short notice. I contacted several local flooring contractors, and they were also similarly booked solid through the end of June or later. As a last resort, The City of Boston asked me to submit a proposal for the work. Michael agreed to guide me through the process and spend time on the job to give us hands-on training. Tony and John Carbone at American Sport Floors, who had been too busy to take on the work generously agreed to partner with me to manage the considerable administrative demands of working for the city. I was able to put together a work crew of friends and started the job less than two weeks after the proposal was submitted.

Here’s the Great Hall partway through the stripping process: 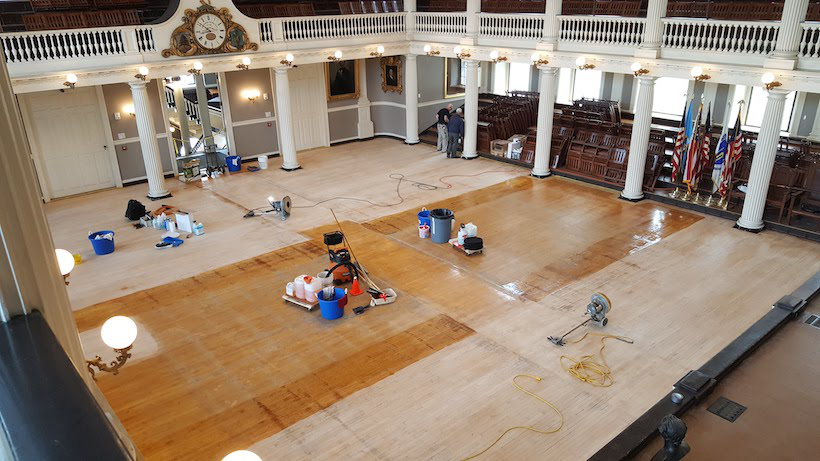 After the stripping was completed, we went over the floor with a fine paper on a Bona Multidisc with dust collection: 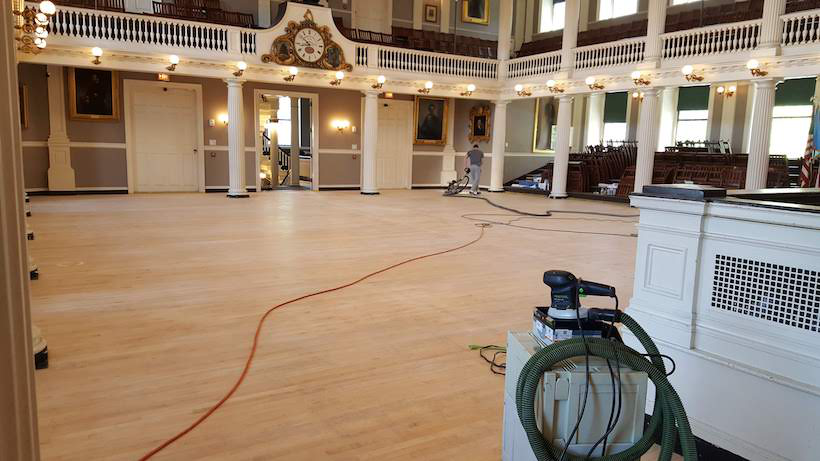 We then buffed the surface with a tampico brush with dust collection, then tacked the floor and applied Bona Craft Oil 2K. We chose a penetrating oil finishing system so the floors could be maintained in perpetuity by vacuuming, dry microfiber tacking and cleaning with Bona Craft Oil Soap as needed; they can be restored with Bona Craft Oil Care. Here’s a shot of the Great Hall after the finishing was complete: 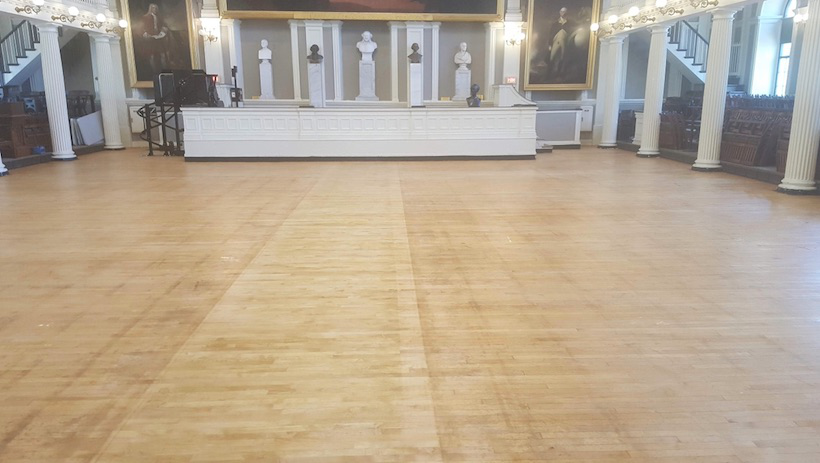 And now, after the Great Hall has been reassembled: 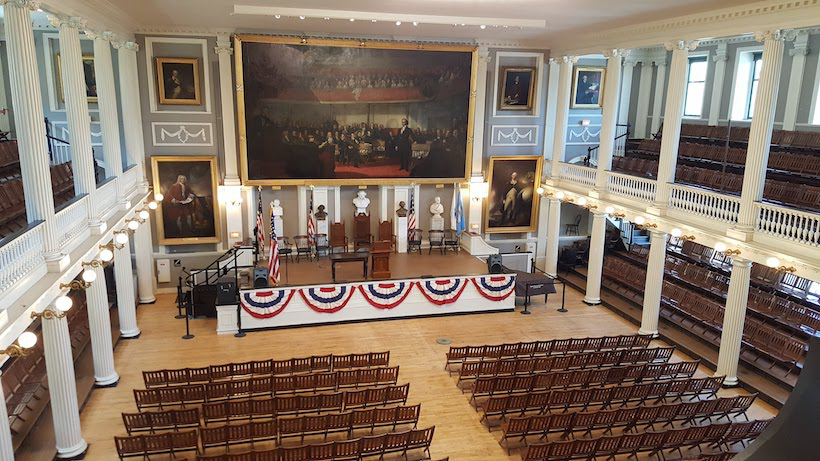 Thanks to this crew for a great job. Left to right, that’s David Buss, me, Michael Purser, Rick Schultz and Stephen Kulka. 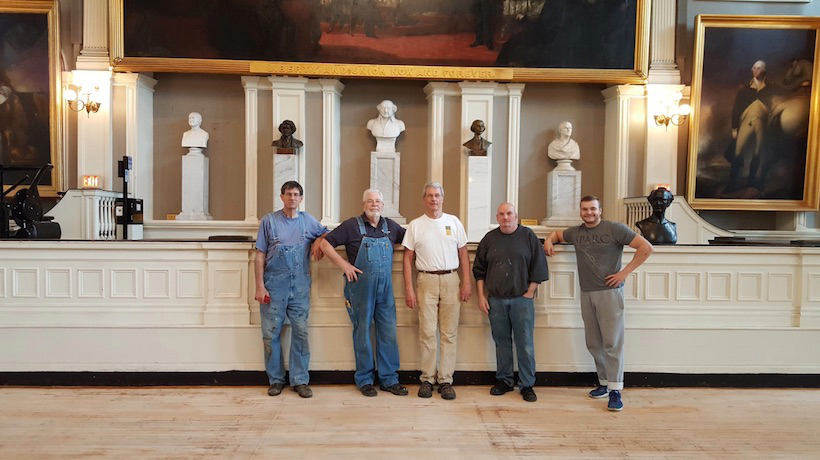 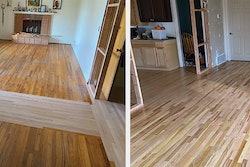