It has long been acknowledged that formaldehyde can be released from adhesives used in composite wood products, such as engineered wood flooring. However, the designation in June 2011 of formaldehyde as a known human carcinogen by the U.S. Department of Health and Human Services (DHHS) has taken the focus on this issue to a much higher level.

Formaldehyde has had a "storied" past. For example, in 2004 the International Agency for Research on Cancer classified it as carcinogenic to humans. This year, the DHHS 12th Report on Carcinogens concluded that there is now "sufficient evidence from studies in humans to show that individuals with higher measures of exposure to formaldehyde are at increased risk for certain types of rare cancers ..." Not surprisingly, these findings have had, and will continue to have, supporters and detractors. Complicating the debate is the natural presence of formaldehyde in wood.

While the scientific debate over the report's conclusions will likely continue, one thing is not debatable. Consumer awareness will continue to build in the marketplace about the cancer concerns with formaldehyde. Media coverage of the Report on Carcinogens was far-reaching. The New York Times, for example, made reference to the health implications for workers in plants where composite wood products are produced with formaldehyde-emitting adhesives. The Times coverage also referenced the impact on consumers from exposure to formaldehyde from these products.

It is imperative that engineered wood flooring manufacturers and the entire supplier chain educate workers and the public about the adhesive systems available.

At one end of the spectrum are urea formaldehyde, or UF, adhesives. These have been the most widely used adhesive systems, likely because they perform well and have the lowest cost. However, they add the most formaldehyde to finished products and also emit the highest level of formaldehyde.

Phenol formaldehyde, or PF adhesives, are in the middle of the spectrum. Not as widely used, they also contain formaldehyde but are lower-emitting than UF resins.

The traditional case against switching to an NAF adhesive system is cost; it is estimated that NAF adhesives increase the cost of manufacturing engineered wood flooring by no more than 5 percent, likely less. Wood flooring with NAF adhesives is becoming readily available.

In July 2010, President Obama signed the Formaldehyde Standards for Composite Wood Products, establishing limits for formaldehyde emissions in a number of products, including engineered wood flooring. The law was based on the standards of the California Air Resources Board (CARB). Given its status as a pacesetter in environmental regulation, California could tighten its laws further. If so, will the EPA then set even more stringent emissions limits for formaldehyde nationally? Time will tell.

A window of opportunity exists to proactively raise awareness of the adhesive options available for engineered wood flooring. Consumers may request NAF adhesive systems the next time they make a wood flooring purchase; in order for them to make meaningful choices, it is necessary to ensure they clearly understand the range of adhesive options. 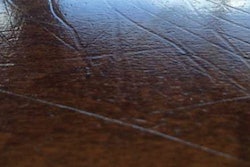