Troubleshoot These Common Edger Problems in the Field

Of the three major pieces of sanding equipment used on the job, the edger stands alone in maintenance needs. Hours of use, high RPMs and the dusty environment it creates are a few of the reasons why edger performance is hampered. Common problem areas encountered on the job site include the switch and plug, paper retaining bolt and jack shaft, casters, and the edger pad. I see problems with these parts every day in our machine shop at our wood flooring distributorship. Using the right solutions to these issues should extend the life of your investment and keep the equipment earning money on the job rather than wasting time in the shop.

Regular use of the on/off switch to change the paper, empty the dust bag, move from room to room or simply give your back a break can cause the switch to fail. This is a very common job-site repair. A poor solution to this problem—and a very dangerous one— is wiring the cord direct. When this is done, there is no mechanical interruption to the circuit, and it is extremely unsafe. Taking the time to test the switch properly and replace it as necessary is a simple and safe way to remedy this problem. A continuity test on either side of the switch will indicate if the switch needs to be replaced. Good voltage meters are available with this continuity function.

Unplug the edger before removing the switch plate cover. With the leads from the meter on the front and back of the switch, set the dial for continuity and toggle the switch between the on/off positions. An audible beep or movement of the analog pin (depending on type of meter) with the switch "on" indicates continuity. There should be no reading in the "off " position. If there is any variance, replacing the switch is necessary. Using the meter to check continuity of the cord through the plug eliminates whether or not the plug or cord are potential problems with an edger starting or not.

When an edger is turned off in the middle of a job, it usually means a paper change is happening. As the paper retaining bolt is removed, debris works its way down the threaded jack shaft and builds up over time. This buildup is pressed and packed tightly every time the bolt is tightened. The mechanic will know there is a problem when the paper doesn't seem to be tight. If the abrasive spins when the bolt and washer are tightened, the jack shaft is filled. The common job-site repair for this is to build up the washer and bolt with pads or extra pieces of paper, but this decreases dust pick-up and eventually causes the retaining bolt's threads to strip.

The proper fix is fairly easy. Simply drill out the packed debris at the bottom of the shaft. If you have a tap-and-die set, tapping the hole with the proper-sized tap will keep the internal threads clean.

To prolong the life of the jack shaft, change the edger paper with the machine on its side to prevent debris from falling down inside.

Casters and the Edger Pad

Excessive use of maroon/white edger pads and paper are also indications that the edger has vibration. Floor mechanics will build up the edger sanding disc in an attempt to reduce the effects of an improperly set-up or poorly running edger.

"Hopping" can occur when the sanding disc is new, worn or bent. Many times a sanding disc assembly is changed in the field, and the edger bounces uncontrollably. Once the casters are set for the proper pitch front to back and the proper position (between 12 o'clock and 1 o'clock), the new sanding pad assembly should then be dressed, or seated, to the machine.

A minimal amount of rubber is removed by running the rubber sanding disc over sandpaper. This helps seat the new sanding disc and remove any high spots from the rubber. If the pitch or angle is too far forward, the edger will gouge. To avoid this, always set the casters by eye and testcut the floor before locking them in permanently.

The edger's casters are an integral part of how the machine sands the floor. Working properly, the casters allow the edger to glide over the floor in any direction for a smooth, flat cut. A buildup of filler or debris on the casters themselves causes the bearings to bind. A quick fix for freeing up bearings in the field is soaking them down with WD-40. While this works temporarily, the residue will attract more of the fine dust the edger is famous for, and the bearings will fail. Regular use of graphite powder is a better alternative to lubricants that can attract fine dust.

Replacing the wheel bearings is slightly more difficult, and it may be easier to just change the caster completely. Any changes to the caster bracket or wheels requires setup as described earlier in adjusting the sanding pad assembly. Always test-cut before locking in the bracket.

Tools of the Trade

Field fixes can be limited to the tools you have on-site. A tap-and-die set, an electric volt meter capable of testing continuity and some graphite powder should help you get back to the job and earning money safely. When in doubt, call your local distributor's repair shop for help and advice. They are more than willing to help you get through most problems and present solutions to keep you going in the field and earning money.

Chris Palembas, production manager for Escondido, Calif.based Palembas Hardwood Floors Inc., recalls that one of the funniest things he ever saw on a job site was when he and two workers were coating a routine job with polyurethane. Palembas and another worker were coating the field, and a third worker—who has been with the company for about 15 years—was doing the brush work around the edges. As always, Palembas had poured a big puddle of finish in the field. The worker doing the edges walked by, carrying his brush and finish bucket in one hand so that the brush was dripping into the bucket. For some reason, he forgot about the finish puddle in the middle of the floor. As if in slow motion, he began to fall backwards, still trying to hold up the bucket so he wouldn't spill any finish. His efforts were in vain, however—as he fell flat on his back into the puddle of poly, his own finish bucket swung upward, creating a cascade of poly all over his head and arm. "At first I was concerned for his health," Palembas recalls, "but then he started swearing at me. At that point I knew he was OK, and I had to go outside because I was laughing too hard to help him." The next day, the worker showed up at work—without his moustache, beard and ponytail, none of which could be saved. 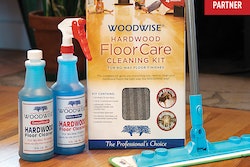 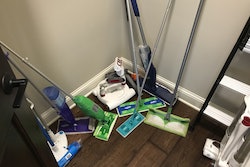 'What Should I Clean My Wood Floor With?' You Need to Tell Them 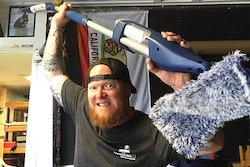 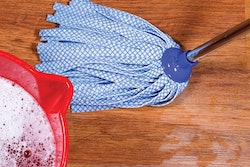 What Confuses Wood Flooring Consumers and What to Tell Them