Bradford Lawson of Victoria, B.C.-based Lawson Floors has a theory about the creator of this multi-species gem he recently unearthed from years of grime and neglect: "I'm thinking it was once maybe an installer's house, and he had a bunch of leftover wood and just went to town," he says. Lawson was tapped to refinish 800 square feet of flooring in the Saanich, B.C., home, which was built in 1928. "Apparently the last owners were totally neglectful; the whole house was just trashed." That's why discovering the vibrant natural colors of this 175-square-foot portion of the floor came as such a surprise to Lawson and the new homeowners once the sanding began. "It looked so dull when I started, I couldn't believe it," Lawson says. He was able to identify wenge, bubinga, walnut, red oak, cherry and bocote in the pattern, and says there were probably even a couple more species he couldn't pinpoint. After sanding with the big machine and edger, "I went through 24 80-discs, then 12 100-discs," he says. "It was a lot of time on the Epoch, especially with all those different hardnesses and pretty much everything on the Janka scale." When it was as flat as he could get it, he applied a coat of oil-modified sealer, and the seemingly forgotten floor suddenly burst back to life. With two coats of oil-modified finish, "The 'wow' factor was definitely up there," he says. 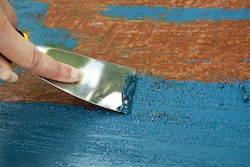 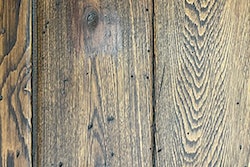 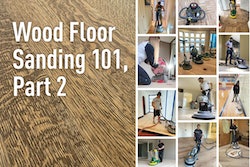 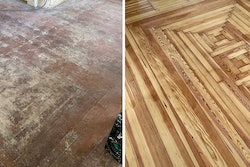