When Thomas De Coninck learned about mid-century drum sanders that were powered by gasoline, his first reaction was (probably similar to a lot of pros’): “WTF!?” “Who gets it in his head to sand parquets with a gasoline engine in the house?” says De Coninck, who runs Parquet Supplies in Spiere-Helkijn, Belgium. As a lover of wood flooring history, however, naturally De Coninck’s second reaction was that he had to buy one. And as luck would have it, he ended up finding two, both in France, where the engines were manufactured by Bernard Moteurs in the 1950s. The smaller 3-hp green machine was made in 1955, and the larger 4-hp machine dates to 1951. Neither are functioning right now, but both were designed to start with a pull cord. De Coninck is enjoying researching the machines and looking into possibly restoring them in the future. For now, they’re displayed proudly in De Coninck’s showroom, where they’ll be sure to baffle and horrify wood floor pros for years to come. “I will definitely not rent them out, even if I could make them run,” De Coninck says. “They certainly couldn’t sand dust-free. And then there’s the exhaust fumes…”

RELATED: Blast From The Past: Wood Floor Tools and Machines from Yesteryear 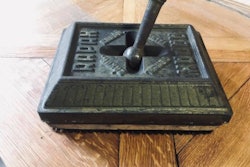 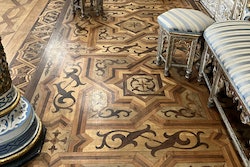 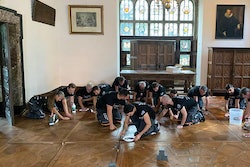