Just steps from the White House is the Decatur House, built in 1819 by Commodore Stephen Decatur, who had little time to enjoy it due to dying there in a duel the following year. Today the home endures, maintained by the White House Historical Association, and when the association wanted to ensure its wood floors also endured, it turned to Universal Floors, based in Washington D.C.

"It's not a regular job site by any means," says Sprigg Lynn, president at Universal. "You could not sand the floor; you can't take that patina off the floor. It has that look like an old saddle." Under the watchful eye of preservationists, the Universal crew worked with a buffer and by hand to remove layers of old wax using steel wool, DuraSeal Renovator, turpentine and some proprietary products. Loose boards were fastened by "drilling the tiniest holes you've ever seen" in the cracks of boards next to nail holes and injecting epoxy.

The showpiece of the floor is a medallion that was added to the home in the 1870s by its wealthy Californian owner. Multiple species, from holly to goncalo alves to Spanish cedar, comprise the medallion; the pieces are actually veneer adhered to a yellow pine backing with hide glue, which Lynn says crystallizes over time, losing its adhesive properties. There were so many layers and types of wax that the different species were almost indistinguishable. For now, the pieces have been stripped and re-secured to the floor, but Universal is also recreating the entire medallion for when individual pieces, some now almost paper-thin, must be replaced. The entire floor is now repaired and restored with paste wax, and the historic medallion is protected by a 1⁄4-inch-thick piece of glass in recognition of its value, Lynn says: "You can't replace it; it's like a piece of scroll art."

See more artistry from Universal Floors in these articles:

Best of the West

Prizes on the Potomac 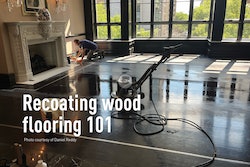 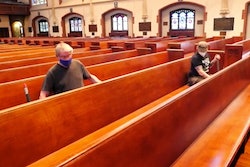 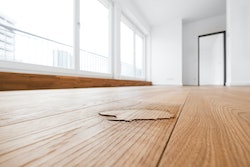 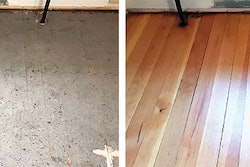