Why Would an Existing Wood Floor Cup After Refinishing?

Howard Brickman
Jan 19, 2021
Cupping that happens after refinishing could be merely a coincidence, or it could be the result of an impermeable finish trapping moisture.

Recently there was a question on a Facebook group from a contractor who had refinished a floor. The floor previously had no issues with cupping but, after sanding and coating it, the floor cupped. Periodically you hear of these situations. Why does this happen?

Without doing a complete inspection, it's impossible to say what caused this, but we can come up with some hypotheticals. We do know this: If a floor has cupped, the vast majority of the time it has an asymmetry in its moisture content between the top and bottom of the board.

First, it's possible that refinishing the floor and the floor cupping are simply a coincidence. When wood floor work is being done, it's often part of other work going on in the home. It's possible the grading around the home changed, directing moisture to the subfloor. Maybe something happened that caused a large amount of moisture in the basement. Sometimes this coincidence, like the grading around the home, will still be visible after the cupping occurs. Other times what caused the cupping might no longer be present, and all you can see now is the residual effect: the cupped floor.

The other likely scenario is that the new finish is trapping moisture. It's possible that there was a finish on the existing floor that was relatively permeable, allowing moisture vapor to be transmitted through it fairly easily. Maybe there is a source of excessive moisture below the floor—not a massive amount, but in the range that many damp basements and crawl spaces are—and the new finish is relatively impermeable. Before, that excess moisture was always present but was being allowed to escape by passing through the finish. Now, it's reaching the wood floor and finding an impermeable barrier, so the moisture is accumulating and being trapped in the wood. Old finishes, like shellac, penetrating sealers and wax, are very permeable, but multiple coats of surface finishes can form a relatively impermeable layer. (Back when we installed lots of fingerblock parquet on concrete, we would always use penetrating finish to avoid any moisture problems.)

In either scenario, it's possible that once the source of excess moisture is removed, eventually the cupped floor will flatten. If the cupping remains long-term, however, the boards may have set in that shape.

The best guidance for dealing with a cupped floor is, "Act in haste, then repent in leisure." This means that you should first determine with certainty what caused the cupping. If you are not absolutely, positively certain about the source of the moisture based on valid observations AND measurements, suspend any corrective action until you find the source of the problem and correct it. You may never be certain as to the cause.

Sanding a cupped floor that has not returned to a normal MC will sand off the edges of the boards, resulting in crowned (convex) boards that were previously cupped (concave). You may end up resanding a second time or, even worse, replacing the floor. If you don't know how to measure MC in the flooring and subfloor accurately, bring in someone who has the proper knowledge and equipment to accurately make the determination. 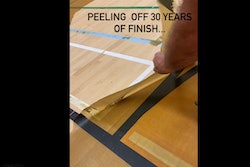 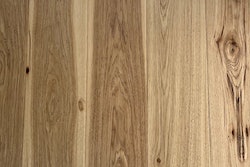 Wood Floor Mystery #11: What Do You Think Caused These Black Spots? Part 2: The Answer 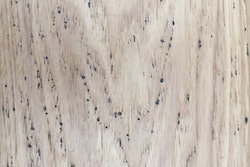 Wood Floor Mystery #11: What Do You Think Caused These Black Spots? Part 1: The Problem