One of our distributor representatives had a contractor with a complaint: A 1/2-inch oak product he had installed three months earlier in a condo in Las Vegas now contained numerous cracks and small splits in the wood.

I followed up with the contractor and learned the flooring was an engineered natural red oak floor that had been glued down in early spring using the recommended urethane adhesive. The floor covered approximately 400 square feet and was on the second level of a two-story condo. The contractor noted that the cracking and checking in the boards was throughout the floor and that the installer had carefully followed moisture content (MC) specifications for the subfloor and the oak flooring. The contractor added that the floors were installed in optimum conditions, with HVAC running, after all other construction had been completed on the unit. Although the condo had remained unoccupied, he stated that the temperature levels had been maintained at 65 to 75 degrees Fahrenheit.

Because the contractor noted that living conditions had been maintained during and since installation, I decided to personally investigate. At the site, I was accompanied by the contractor and a local distributor representative. Upon entering the unit, I saw no signs of excess moisture due to leaks or evidence of damp mopping. I then used a moisture meter to test the MC of the boards and a hygrometer to test the relative humidity (RH) in the condo. What I found was not surprising based on the amount of splitting present: The MC of the boards ranged from 3.5 to 4.5 percent, and the room's RH ranged from 17 to 20 percent. I then asked the contractor to take me to the condo's HVAC system. I found the HVAC unit was indeed working and that the temperature in the condo ranged from 74 to 80 degrees. However, the HVAC unit did not have a humidifier, and no portable humidifiers were being used in the rooms. Also, the window treatments were open at the time of inspection, causing afternoon sunlight to stream in, which was contributing to the low humidity levels.

The cause of the cracking and checking in the boards was obviously due to a lack of moisture inside the unit. With the location's dry climate, the condo's RH level was about half what was needed to properly maintain the oak floors. Ideally, RH should be between 35 and 55 percent, and the MC of the floors should be between 6 and 9 percent. Either a humidity-control device was needed on the HVAC unit or portable humidifiers should have been operating in the rooms.

Unfortunately, in this case, the oak floors were quite damaged and needed to be replaced.

The NWFA standards state that "wood flooring will perform best when the interior environment is controlled to stay within a relative humidity range of 30 to 50 percent and a temperature range of 60 to 80 degrees Fahrenheit." This, of course, requires the appropriate running of HVAC equipment (with humidity controls as needed). The advice is particularly important when the unit is not occupied and moisture from normal human activities-such as bathing and showering-are also absent. Set your room temperatures at a number that best maintains an appropriate RH level for the home. This will ensure the hardwood floors remain in the best possible condition for the new owner. 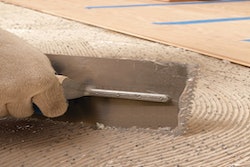 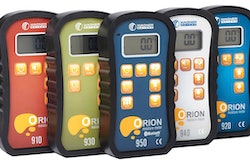 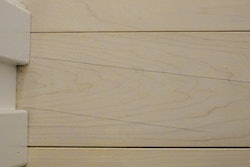 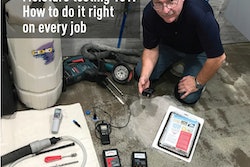