Constructing a 100-seat amphitheater out of discarded pianos may sound crazy, but as the team who built the Pianodrome in Edinburgh, Scotland, discovered, where there's a will, there's a Steinway. The 40-by-40-foot venue's tiered seating is made entirely from nearly 100 pianos, mounted on a stage featuring beech and cherry planks reclaimed from a gymnasium. It is the brainchild of Edinburgh-based musicians Tim Vincent-Smith and Matt Wright, who hatched it not long after Vincent-Smith, who is also a carpenter, asked a mover if he had any unwanted pianos. The mover immediately delivered three to Vincent-Smith's studio—and then didn't stop. After acquiring enough old pianos to flatten an army of Wile E. Coyotes, they composed a plan to construct the Pianodrome, eventually securing funding and about 200 volunteers to erect it at the Royal Botanic Garden in Edinburgh. The final piece was the beech and cherry stage, the planks for which were screwed onto 20 wedge-shaped steel segments that connect to form the platform. Five of the wedges alternate between cherry and beech boards in the pattern of piano keys, and the center of the stage floor is a black piano lid. While the flooring was sanded and coated, the original patina of the old pianos, a patchwork of species of varying ages, was untouched. "It's a real sort of Pandora's box and exciting," Vincent-Smith says of the wood. "Every piano is different." The whimsical venue has struck a chord with audiences, becoming a popular music festival hub. The bands are good, Vincent-Smith says, but having a good venue is "key"—and the Pianodrome has plenty of those. 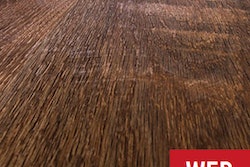 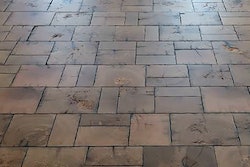 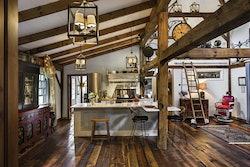 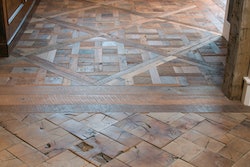