OK, now that I have your attention, let’s discuss what I think is the bane of all flooring material: wall-to-wall carpeting (WTWC). I don’t think there has ever been a more disgusting material manufactured that can be put over a wood floor. I’m on a mission to expose it for the flawed material it is and I’m hoping you will join me in my crusade. For starters, here’s a partial list of some of the failures of this wretched product:

As I’ve recently seen, and listed above, some of the most telling and permanent damage from WTWC comes with its installation.

The tack strip is a nasty piece of work and could double as a medieval torture device. It’s attached to the floor around the perimeter of the room with a ribbed shank nail for secure holding and on the top surface has small sharp teeth to hold the carpet in place. If you’ve ever removed these items, you quickly learn two things: Those sharp teeth have a nasty bite, and that ribbed shanked nail can pull up hunks of wood.

The lazy installer often adds insult to injury. As opposed to measuring and fitting the carpet pad, it’s often brought into the room and roughly cut in place. When the lazy installer takes his razor knife and carves through the pad, he often cuts into the floor as well. This leaves a deep incision in the wood around the perimeter and in center sections where additional fitting takes place. As is often the case, over time, moisture seeps into the incision and develops water staining.

For the wood flooring contractor who follows this type of sloppy work, getting these marks out often proves problematic. First of all, the amount of sanding needed can go up substantially. But often times, that still doesn’t mitigate the issue, as the water stain from the incision or rust stains from the nails is much deeper. Excessively sanding a floor serves no other purpose than to weaken the floor and often leads to cracking and splitting of the wood.

Installing WTWC over a wood floor is just a bad idea. Put it over plywood, particleboard or concrete, as the damage to the substrate will be minimal. I don’t sell or install the stuff, but I’m often asked my opinion about it, and that’s when the gloves come off. It’s not just a matter of protecting an old wood floor. The case I argue revolves around the health and hygiene issues.

Homeowners need to know the truth about this insidious piece of textile and they rarely get it from people selling or recommending it. So don’t hold back if you can put your two cents in the conversation. I’ve cut my talking time in half by using the “underwear for your floor” analogy, and I make sure they know that’s it underwear you can’t take off. Just throw it out there and watch the reaction you get. Priceless. 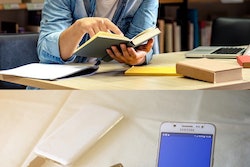 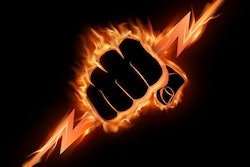 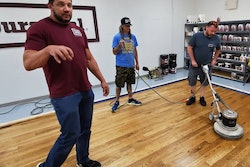 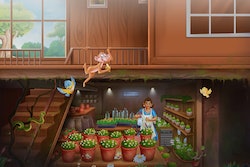