Gaps Appear in this Wood Floor After a Fire Restoration 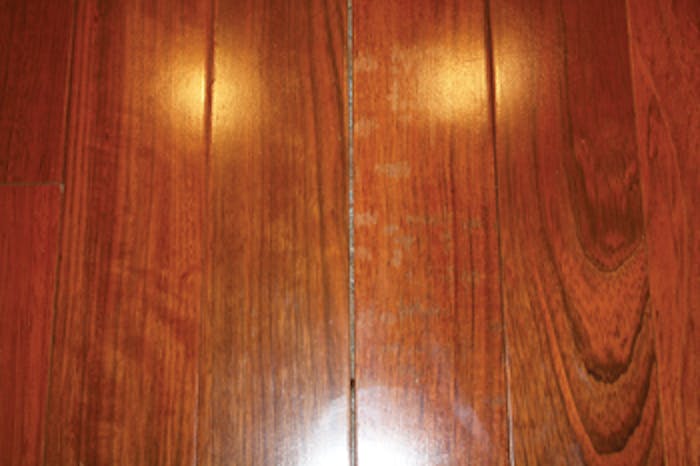 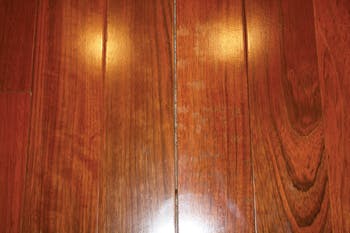 I was called to do an inspection on a 3-inch solid prefinished Brazilian cherry wood floor installed over OSB. The homeowner said there were gaps left all over her floor.

The home had a fire in the family room that did extensive damage. At some point it was decided the home should be torn down and replaced; only the concrete foundation, the 2x4 engineered floor joists and the OSB subfloor remained from the original house. Only three or four OSB panels were replaced where the fire had been.

Once the home was rebuilt and the wood flooring was installed with a pneumatic nailer over the OSB, the homeowner complained about what she called "cracks," which were gaps between some of the boards. She said the installer told her the gaps were left in the floor for expansion. She also questioned the installer about the lack of a vapor retarder under the floor, and he responded that he doesn't use one on his jobs.

I was hired by the manufacturer to inspect the floor, and after hearing the details, I thought this would be a typical floor that was drying out in a home environment with a low RH. But after being at the job site for awhile and doing testing, I noticed something unusual: Without measuring the gaps, I could see they were pretty much a uniform distance apart from each other. After pulling out my tape measure to check, I found the gaps were almost a perfect 4 feet apart. I then went down in the basement and measured from the outside foundation wall of the home to the subfloor seams. Sure enough, the seams of the OSB panels aligned with the flooring gaps. What I was seeing was panelization from the subfloor shrinking around the edges of the panels.

OSB panels, like all wood products, react to changes in moisture and humidity conditions. OSB is required by North American standards to maintain its strength and stiffness performance under "normal" or "standard" conditions, which are defined as 68°F and 65% RH (typical for protected construction). Even though this particular subfloor seemed dry, it had too much moisture. Not giving the OSB panels enough time to dry out caused the problem-the panels shrunk around the edges, taking the flooring with them and causing the gaps. Also, testing has shown that OSB panels put through too many wet and dry cycles can lose holding power.

Since this was a prefinished floor with bevels, filling the gaps could be attempted, but it's best that the floor be pulled up and reinstalled after making sure that the subfloor has stabilized. If the holding power left in the OSB is not enough for a wood floor, it needs to be replaced, or a ½-inch plywood subfloor could be added on top.

Moisture levels should always be checked with a moisture meter on any job, and a job like this-when the subfloor remains after a fire, demolition and reconstruction-merits extra caution. Although OSB is a wood product, there is at least one manufacturer that uses up to 16 species to construct their product. Just as in flooring, these different combined species will react differently regarding performance and moisture content. Finally, as mentioned, be cautious about the holding power of OSB that has dried after being exposed to water. 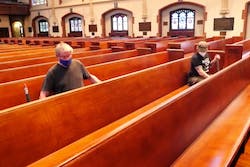 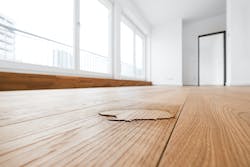 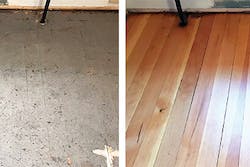 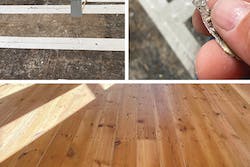