Wood Floor Mystery #7: The Case of the ‘Burned’ Floor, Part 2

Right out of the gate, let’s address the elephant in the 120 square-foot room. Why did the contractor continue coating the floor after knowing a black stain was growing throughout the floor seams? This is what he told me: “I was done. The job was done. I ran out of time. It’s like …120 square feet.”

Let me back up and say that (I can hear you groaning when you read this), the floor sander is a painter and offers floor refinishing as a side gig. He may be a competent floor refinisher, but maybe he hasn’t seen something like this before. On this project, he was responsible for several remodeling aspects. He painted, did some trim work and refinished the floors. This one room was the only section of flooring with issues. (This floor was completely bordered off and separate from the other wood flooring except where it butted up against a 3 1/4-inch prefinished ash floor.) This contractor said he was told to refinish what was there. Since he did not cause the staining in the floor, he kept going and left the floor “as is.” They are still debating over who is at fault. (That might be a good blog/article for our WFB legal team!)

I offered to take a look at the floor over a weekend and, in the meantime, surmised that since there were no signs nor smell of pet urine, then there must be some pre-existing condition that caused this. The black staining migrated ONLY through the seams, and mostly on the end joints. Could this floor have been stained with a very dark stain, sanded and refinished with the medium brown stain our contractor had sanded off, and then refinished again by this contractor? I asked the contractor the following:

Q: Did you wait overnight in case there was bleed-through?
A: I was told I should but we were on a schedule, so we busted it out in a day.

Let me pause here to say: Never coat a stained floor without allowing some time to inspect for bleed-back! Even, actually especially, if the floor was stained very recently.

Q: Did the floor look good after you completed all your sanding, vacuuming, and tacking?
A: What’s tacking? Just kidding! He didn’t ask that. He confirmed that the floor looked great … BUT he said this about the floor after he coated it: “The seams where the black stains are turned ‘opaque.’” Ouch. And yes, looks like there was some off-gassing between the boards (you can see that in the two photos at the top left at the start of this post).

There were no burns, bruises, or stains in the floor until AFTER the water for the water-popping had been applied. He called a reputable flooring contractor (his brother) who told him to go no further … but he kept on going, including staining and top-coating with a water-based single-component professional floor finish. He basically locked in evidence of his own mistakes.

I had asked him to meet me at the job with an oscillating multi-tool because I felt we might have to remove a board, and that is exactly what happened. Upon removing a piece of flooring that was very stained, small, and in a reasonable place to be repaired, this is what we found:

The seams of the board had a dark black stain that did not match either the new stain or the one that had been sanded off. It did match the black staining wicking up into the seams. The dark black stain was also in the tongue and groove, and had run through the nail holes and into the subfloor. Someone, at some point, had saturated this floor with a heavy black stain, and it had been removed and coated over. But what was it?

That’s not all. There was no underlayment paper anywhere. Under a few wall gaps beneath the radiators I spotted what looked like clear plastic. Upon removing the board, we found 6-mil poly sheeting had been used under the original installation. Pretty typical for back in the day since the basement was cold and damp. A plastic impermeable base, a porous wood floor, and a hardened polyurethane topcoat with stain trapped between?

That’s why you let a floor wick dry overnight ... I learned that one the hard way when I used water-based stain back in ’87 and … WHOA! That’s when it hit me: I HAD seen this before, when I was the cause of it. Using water-based stains for the first time, I had a series of failures that compounded each time we tried to resand and finish. I quickly moved on from those early experimental stains!

I took the sample to my shop. I applied mineral spirits and found it did very little to the stain. Under close inspection, I could see a boatload of the black stain in the edges, and you could also see the medium brown stain. I applied water to the board to simulate the water-popping … BOOM. The brown stain was unaffected by the mineral spirits or water, but now I had black stain on my fingers, and I could actually watch the stain migrate through the pores of the wood. I cut a slice off and added warn water, and the stain spread. I then scraped and sanded the board and water-popped it, and the wicking continued. Lastly, for fun, I set the board in a tray of warm water. Take a look at these photos. Anything that WAS black stained not only wicked out of the flooring but turned the water brown:

What happened? Looks like the original stain, likely water-based, had been removed but had penetrated and remained in the floor seams everywhere. When the floor was water-popped, it reconstituted the stain, which then began wicking though the wood fibers and up to the surface.

Is there a Mystery 7 Part 3?! Possibly. The contractor and homeowner are arguing about who is at fault, and our little 120-square-foot nightmare continues to haunt that home to this day. I begged them to let me rip up the entire floor. Just to see if there is stain all over the place, I even offered to donate 140 feet of prefinished or unfinished flooring. If they take me up on my offer—stay tuned! 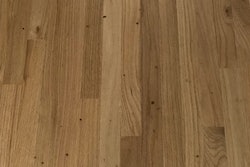 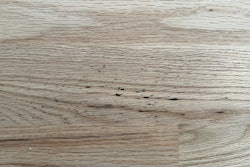 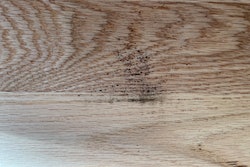 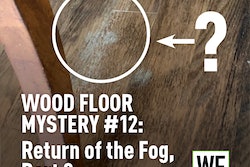