Sonny Callaham
Nov 19, 2020
My immediate thought when I saw this floor was a roof or plumbing leak, but that wasn't the case in this home.

I was asked to look at a wood floor that was cupping and buckling throughout.

The house was on slab and on-grade. The wood floor had been glued to the slab using a urethane "all-in-one" product with a warranty against damage from moisture. Two months after installation, the floor began to cup and then began to have areas that were buckling. The flooring contractor had been there multiple times for repairs.

I found the wood flooring to be consistent with the original complaint, and found signs of moisture in other features of the home. There was mold on the baseboard and drywall, and the ceiling had water stains. This house was not suitable for habitation. Everyone's first thought was a roof leak, but the roof had been checked—it wasn't leaking and hadn't leaked. The next thought was a busted water pipe, but the plumbing had been inspected by a plumber who determined no leak was or had been present. I started to pull up the wood floor and, sure enough, found standing water under the wood flooring.

I didn't mention until now that the home was in southern Louisiana. Looking out the front or back doors, there is nothing but swamp. Before the inspection, no moisture testing had been done, since the adhesive has a warranty that states "unlimited moisture" (but has some restrictions in the complete warranty). I then went outside and found the side of the house, gutters and concrete along the back of the house covered in mildew. I went out to the street to take in as much of the house as I could, and I realized not only was the grade of the yard down toward the house, but the house was about 12 inches lower than the the boundary of the yard and surrounding swamp.

The slab was literally below the water table. It is one of only two jobs I have seen in my entire career that truly had "hydrostatic pressure." This term is often used, but is rarely the case. It can occur ONLY when the bottom of a slab is below the top of the water table—the water is forced down, under, and back up through the slab, trying to equalize with the highest point.

The GC learned a valuable lesson regarding intact vapor retarders and water tables on this job. Even with adhesives that carry an unlimited moisture warranty, it is still a good idea to perform moisture testing. 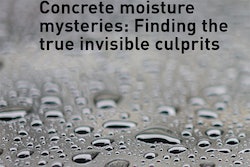 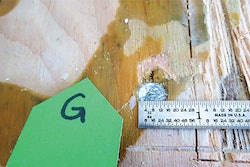 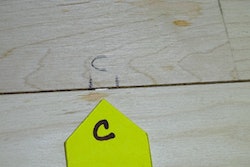 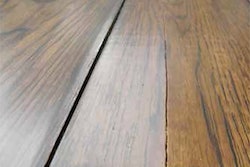