This Unidentified Flooring Oddity Turned Out to Be ‘Resonance’

Stephen Diggins
Mar 19, 2020
Above left, the chatter marks showed up perfectly perpendicular to the floor, even when the big machine was run at an angle to the floor. Above right, the final result after sanding with a multi-head sander.

I recently got pulled into a wood floor sanding mystery in a desert area of New Mexico. In a region known for oddities from outer space, we had our own UFO: Unidentified Flooring Oddity. Things for the flooring contractor had gone from hero-to-zero faster than you can spell Albuquerque when, after staining, strange marks in the flooring became apparent.

The issue was what looked like chatter that appeared everywhere once a stain was applied to the 5-inch white oak, which had been installed on a double-ply subfloor floated on screeds over a slab on grade. The marks were tight and appeared consistently where the big machine had sanded. Interestingly, the marks were perfectly aligned regardless of where the machine started or stopped: The tracking was perpendicular to the flooring no matter what angle was used when sanding.

The installation looked beautiful. The sanding was performed in textbook fashion, but after staining, the homeowner noticed the machine marks throughout. She mentioned them to her contractor, who told her the marks were from "vibration," which he said is common and can't be helped. She then requested her contractor go no further until she had a better understanding of what happened and if it could be made right. She came across a blog I wrote on the WFB website with photos very similar to the ones of her stained floor, so she called me.

Many articles have been written on the similar phenomena of "chatter" and "wave," and definitions can be found online or in trade publications. Was that going on here? Was it faulty bearings? A dirty upper roller assembly? Sanding belts slipping? Machine drive belts slipping? Uneven electrical supply? One of the multitudes of other reasons for chatter?

No, in this case, even without being able to go to the job, I was confident the contractor was right about the problem being vibration (I did disagree with him that there was nothing you could do about it). To be precise, the cause was resonance. What is that? It's something everything wood floor sanding pro should be familiar with. Floor sanding machines (or any machine), musical instruments and mechanical structures "vibrate" at a certain wavelength, or frequency, measured in Hertz (Hz). Floors have a distinct and measurable vibration frequency based on their construction and loads.

The most famous example of resonance is the 1940 Tacoma Narrows Bridge. Four months after opening, normal winds matched the bridge's natural frequency, causing the bridge to undulate until it collapsed into Puget Sound. The same thing can happen with the resonance of a sanding machine and a wood floor.

When you sit on a bridge in traffic, you can feel the entire structure oscillate to the vibration of the car engines. This is one reason why bridges have expansion joints. As a woodworker and amateur furniture maker, I have seen machine chatter for decades, especially in the form of planer chatter. The sharpness of cutters, pressure of the system, loose or faulty machine parts, and density of the wood can all be contributing factors. A floor sanding machine leaving chatter is literally plotting out its vibration signature created between the drum and substructure—it's printing that signature directly onto to the floor. Unfortunately, flooring techs don't have the controls that a woodworker has with machine adjustments, etc. In this case, I moved on to figuring out what would work to create a solution for this floor.

In this case, we decided the floor should be sanded using the finest grit that would get the floor back to clean wood. Then I suggested they sand the entire floor using only multi-head rotary (planetary) sanders, which would avoid the issue of resonance (in the previous case I had written about, the contractor initially tried buffing it out, which only emphasized the existing chatter). I suggested they stop sanding with the multi-head sander at approximately 100-grit, then buff the floor with fine screens to be certain any marks left by the rotary equipment would not show up during the staining. I suggested a thorough water-pop prior to staining and, of course, only professional-grade stains and coatings. The contractor was hesitant, but he was professional, and I could tell he knew his stuff, so he followed the recipe, and the results were drastically different. 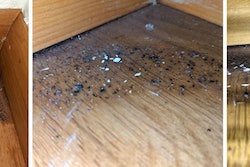 Wood Floor Mystery #8: Is This Floor Fungus Among Us? Part 1 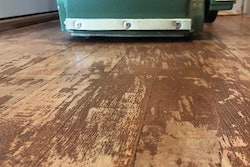 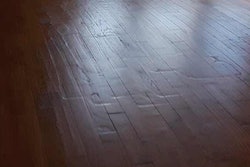