The Hell With Old-School Thinking: Take Your Health Seriously ... I Didn't

A little over a year ago, those of us in the wood flooring trade lost a friend, associate, mentor. Sad for us, but not as heart-rending as the loss of a loved one to his family. Roy Reichow succumbed to cancer—a cancer his doctors believed was related to the chemicals he was exposed to daily in the trade he plied throughout his life. Finishes, adhesives, gallons of solvents … and the manufacturers who made those products knew their products were potentially dangerous, even deadly.

Hearing of Roy’s demise brought me back to a Wednesday night several years ago when I received a call from my doctor. Trust me, if your doctor thinks it is necessary to call you in the evening, it doesn’t portend good news. I had gone through a series of tests, and the chickens came home to roost: I had cancer. Cancer caused by the chemicals I had ingested through my lungs, skin, even eyes as I worked for decades on wood flooring job sites. I sat there after the phone call, simply taking a deep breath and trying to think of what was next. My wife, Maggie, was sitting across from me, and I didn’t have to speak a word. Tears were running down her cheeks; she simply walked over to me, hugged me and then said, “We will get through this together.”

The next difficult step was telling my children and grandchildren, who all supported Maggie and me from the first day. I have lived my life with a sense of humor and a large grain of salt, but I truly believe telling my story here in full color may help someone else in the future. I wrote an article at the time, but I left out the gory details. The devil is in the details, so I want to tell the detailed version now.

I had a surgical procedure to place markers in 18 areas where the cancer cells were located. The procedure itself introduced a rare strain of bacteria into my blood stream. That night I became violently ill. My temperature went over 103, and I began shaking uncontrollably. Paramedics came and took me to the ER. It took two days to identify the strain of e-coli before they could use targeted antibiotics. All they could do during that time was try to control my temperature and administer broad-spectrum antibiotics.  I spent eight days in isolation at the hospital until the fever broke. The doctors inserted a “PICC line,” basically an IV placed in a large vein and left there to administer drugs over days at a time. I had to go to a facility for 38 days in a row to have a bag of antibiotics administered. During this time, I began the first of 43 days in a row of radiation therapy. Early morning IV, afternoon radiation, then home to rest. The process was daunting. It did kill all of the cancer cells, along with scarring my colon permanently and compromising my immune system. There is no reason to detail the pain, fear, anger and frustration— every cancer patient goes through it.

Were there any prominent labels on the pails of wood floor adhesive containing chlorinated solvents? On the cans of moisture-cured urethane, gallons of OMU and various additives? How about a large skull and crossbones icon? No. The manufacturers knew what was being done (and in some cases, still is). Not until the government stepped in and began regulating these products was anything done. To this day, some people in the industry use products known to cause cancer and birth defects. Hell, there are folks out there who lament the loss of those products because they believe they did a better job, or were easier to use, or cheaper … pick a reason!

No one in their right mind would intentionally place their hand on a running table saw blade. Most of us know that wood dust can do major damage to our lungs. There is a long list of conditions: pneumoconiosis (a disease of the lungs due to inhalation of dust, characterized by inflammation, coughing, and fibrosis), silicosis (a long-term lung disease caused by inhaling large amounts of crystalline silica dust, usually over many years), progressive respiratory failure, lung cancer, occupational asthma, just to name a few. So, why do we still ignore what is in the products we use? Why not use respirators?  Why not band together and fight for safer products to ply our trade?

The hell with “old school” thinking. Slowly killing yourself doesn’t make you tough or strong, it proves you are either stupid or subconsciously suicidal. People ranted against seat belts, air bags, speed limits for crying out loud! These things save lives and the agony of losing loved ones—agony that could have been prevented. So, wear your eye protection, face masks, respirators, hearing protection… use it all.  Please, take it from an old wood floor man who wears hearing aids, had eye surgery to remove splinters and survived cancer.

"Do not go gentle into that good night."—Dylan Thomas 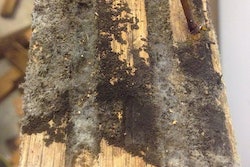 Wood Flooring Q&A: What Should I Do If I Discover Mold? Is It Dangerous? 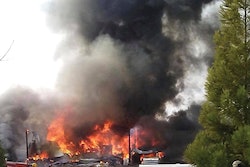 A Terrible Surprise After My Business Went Up in Smoke 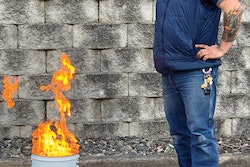 A Day I Can’t Forget: When the House Went up in Flames 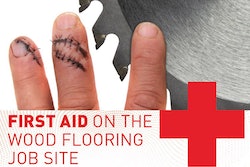