The Largest Portable Court in the World | Wood Floor Business

At a community center in Hoover, Ala., rests the elephantine expanse of what is likely the world's largest portable gym floor—72,000 square feet of maple painted with the lines of 11 basketball courts and 17 volleyball courts. The Findley Center wanted to be able to move portions of the floor for special events, and the request added to the job's complexity. Constructing the colossus was, as Praters Inc.(Chattanooga, Tenn.) President John Prater puts it, not a task taken lightly. The massive floor, manufactured by Connor Sports (Amasa, Mich.), had to be assembled, sanded, stained, painted and finished in six sections at Praters' 60,000-square-foot facility in Rossville, Ga. Once they completed a section, they removed all but one completed row, which was then used to line up the next working section. "That was the hard part, because we had to make sure that it was all consistently sanded and the game lines matched up," Prater says. It took 12 trailer loads to transport all 2,400 panels to the Findley Center. At that point, the Praters crew took just three days to assemble the full court. Prater thinks it may be the world's largest portable court. Certainly the court is the biggest the company has attempted. "Going into the unknown, there's a bit of a learning curve," Prater says. "We started slow and once we got the process down, it went off without a hitch." 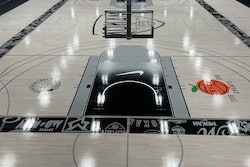 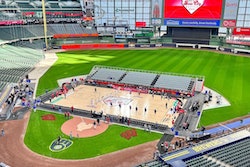 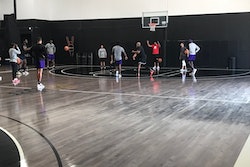 Pull dust out before it can settle.