Eric Rose
Nov 18, 2019
Although it's hard work, there's something addictive about creating something hand-hewn with your hand-scraper.

Like many pros, I began doing wood flooring in high school; I worked with my cousin who worked for a big company in the Bay Area (I think I got something like 30 cents a square foot to install). Working there and at other companies afterward, I learned how to do your typical install, sand and finish. I started my own company 10 years ago, and things went great, but after about five years it really took off once I began specializing in hand-scraping. Today my business is focused on higher end custom work, and I enjoy it more, too, with the daily hard work of creating something by hand.

My focus on hand-scraping happened when I helped out a buddy of mine who is the only guy I've ever known personally who scraped floors. We were starting the job, and he told me I had to scrape the whole floor. I was like, "The whole floor?!" But I got to work. From the beginning, the tools and the whole idea were really intriguing to me, so I started researching it. I saw Dave Marzalek online and watched his stuff, and I started watching YouTube videos and stalking the websites of the guys who do it. Then I started building panels in my shop and scraping them, using trial and error to see what looked good and experimenting to see which finishes worked best with the hand-scraping. In that process I realized the artistic form of hand-scraping a floor is so much different than sanding.

The first hand-scrape job of my own was a prefinished floor coated with aluminum oxide. I didn't know I was supposed to sand the finish off first, so I hand-scraped the aluminum oxide off. It was horrible, absolutely horrible. I called my buddy and said, "You do this every day?!" He said yes, and I told him, "Dude, there is no way—no way—you do this every day." I told him what I was doing, and he said I had to sand that all off first … so all my hand-scrape jobs have been easy after that one!

Everyone I've had scrape with me on a job hates it at first, but there's something about it. I've had guys come and go in the company, mostly family, and when I see them, they're like, "Man, I miss scraping." I think it might be the brainless, go-to-town hard work. It's weird, but I find that the honest aspect of forming something hand-hewn is really addicting.

When I scrape a floor, I like to do a full scrape of the entire surface, every inch, following the grain and making it look as if it were worn by nature as opposed to having big lines through it like it was from a machine. A lot of times we'll do a lighter scrape where you can't really see it but you feel it. Sometimes people want it to be really rustic, so we'll do a really heavy scrape and put in chatter, but that's not too often because it seems people want a natural worn look instead of a really haggard, beat-up floor.

Of course, this is a really physically demanding way to do floors. I try to stay in decent shape, and when we're on the job I'll bring a gallon of water with amino acids in it and drink it throughout the day, which helps a lot. The more you scrape, the less it hurts. If you get a month's break between scrape jobs, you'll feel it. And you can physically only scrape so much in one day. Maybe you'll scrape for four hours straight, then take a 30 minute break. After that you can only scrape for two hours before you need a 10-minute break. And then you scrape for one hour before a break, and then you can only scrape for 10 minutes … and it's time to just go home. For awhile we were in a stretch where eight or nine out of every 10 jobs were hand-scraped jobs. I try to not do too many while it's hot, so in the summer scraping jobs are more like half of our work.

RELATED: Hand-Scraped Floors, Part 1: How to Texture a Floor

Now I have a showroom where people can see all the things we do, so I'll start there with a client. People almost always love the hand-scraped samples, because everybody wants something built by hand. Many of our samples are white oak wide plank, because we can do really unique layering systems with the reactive stains (I find that with hand-scraped jobs, traditional stains fill up the scrape and look kind of blotchy).

It seems that when people know you scrape floors or do wire-brushing or other custom things, they're more comfortable hiring you, even if they end up doing a regular sand-and-finish job. Since we started focusing on hand-scraping, we get a lot more custom work, and our typical jobs are often 1,500 to 3,000 square feet. I also enjoy my work more, because every floor is unique and every floor scrapes different; you feel better about what you accomplished. Anybody can sand and finish a floor, but if you don't have a passion for scraping floors, you aren't going to do it. To just have something created with human sweat by hand, there's something to be said for that.

Intricate Wood Textures ‘Not for the Faint of Heart’ 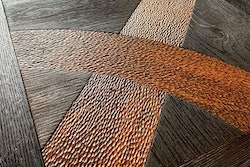 Intricate Wood Textures ‘Not for the Faint of Heart’ 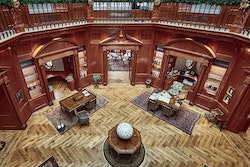 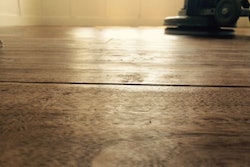 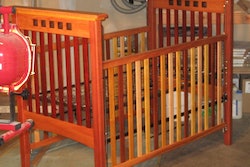 Hand-Scraped Floors, Part 2: How I Finish Them