It took a year for Josh Hansman to grow a TikTok following of almost 40,000.

If you’re a wood floor pro hesitant about joining TikTok, the booming video-sharing app, Josh Hansman knows just how you feel. “I tried to avoid it as long as I could,” says Hansman, who, despite his initial reluctance, has amassed a TikTok following of 40,000 since joining in November of 2020 under the name @50grit. “I just kind of got lucky and it hit,” he says. Hansman, who works for Cincinnati Floor and Window Covering, says he didn’t join the app with any expectations other than using the platform as a creative outlet. His popular videos can be as simple as hand-scraping a corner or moving a stove with an airsled—often with upbeat music added for an engaging effect. The viral success has been rewarding in some ways—getting his name out there—and unrewarding in others, particularly when it comes to the comment section. “There are people that are just mean and hateful,” Hansman says. “You have to go in with a sense of humor.” The app hasn’t generated any meaningful leads as of yet, but a big benefit has been the hardwood flooring community he’s discovered. “For me, it’s kind of just sharing what I do with other guys,” he says. “I try to share tips or techniques or tool reviews. And then for everybody else, I try to do something that’s just entertaining and fun to watch—because that’s what TikTok is.” 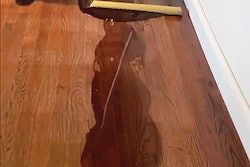 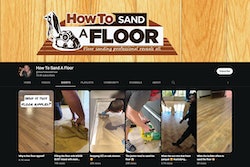 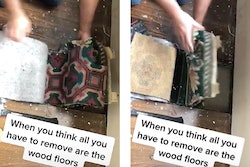 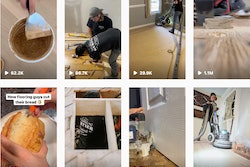